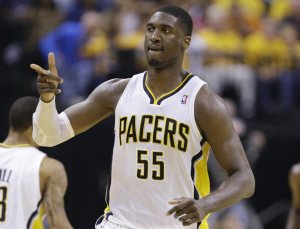 I’m not gonna pile on Ron Hibbert for insensitive remarks he makes at a press conference. Who among us hasn’t uttered patently offensive crap while simultaneously possessing no desire to offend? Hey, I’ve got a glass house post right here that deals me out of judging anyone on the matter.

What I can have a problem with is Hibbert’s confounding inability to follow the protocol that was drilled into his cranium at those media seminars after he was handed the keys to his brand new NBA life. Yeah, his NBA power suit came with an owner’s manual that laid things out from the get. It goes something like this.

When you feel the need to say stupid shit, make sure you’re speaking . . . .

Airing out the malodorous thoughts in your head when hot mics are involved is akin to passing around a hookah pipe at your kid’s show and tell.  It will fetch giggles aplenty, but it will not end well.

Hibbert understands full well what happens when you throw the word ‘homo’ around, even in jest. The time and place sure as hell ain’t a press conference full of Saturday night deadlines begging for a Sunday morning chew toy quote. Which is what Hibbert gave them when he went blue boy with his material. I believe him when he claims no malice was involved. But he can’t expect a free pass for his lousy judgment and he didn’t get one.

I’m not defending the guy. I’m simply wondering why it is that the media feels compelled to consider the opinions of athletes on matters of propriety and sexual preference when these guys can’t even figure out when to speak up and when to shut up.

12 thoughts on “Absence of malice isn’t a defense”