The Boston Marathon, aside from being the oldest marathon in the world, is also one of the most celebrated. It begins on Grove Street in Hopkinton and slinks across Ashley, Framingham, Natick, Wellesley, Newton and finally Brookline, before finishing up on Boylston Street. The twenty six miles and three hundred and eighty five yards is a living testimony to the spirit of a town whose muscular resume was indisputable long before a slogan rallied an entire nation.

The finish line is a ten minute cab ride from Logan; the airport out of which American Airlines flight 11 departed with Mohamed Atta and eighty seven innocent souls aboard on September 11th.

A couple hard scrabble towns separated by 218 miles and whose rivalries run the gamut- from political families to baseball allegiances- became united under the banner of a flag that will always matter more than the differences. Two proud cities, two hateful wicked punches, same resolute response. Hey, we’re still here.

On April 15th of 2013, Boylston Street became something other than a finish line. It became the North Tower, and the South. It became the Pentagon and a Pennsylvania field. It became the latest example that when Americans are pushed, we tend to push back. Hard and mightily and for as long as it takes. 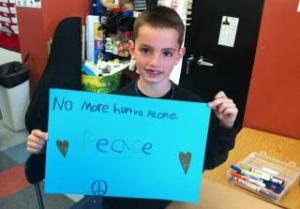 We have experienced our fair share of savage consequences since 2001. All the way from 8:46 am on September 11th to 2:49 pm last April 15th. Our most impossible losses have necessarily become our most important inspirations. Namely, Christine Lee Hanson and Martin Richard.

Christine Lee Hanson was two years old when she was stolen from the world back in 2001. She was a passenger on Flight 175. Eight year old Martin Richard of Dorchester succumbed to injuries sustained during one of the twin explosions near the finish line in Boston. The fight matters because the loss of innocents will never be an acceptable conclusion. It’s not about winning or losing since you can’t win a September 11th or an April 15th. The fight is about staying the course in the face of unimaginable loss. The fight we show is in living a day that Christine Lee Hanson and Martin Richard never get to wake up to. When you can’t settle a score, the only thing left to prove is everything else.

Monday morning will mark the 118th running of the Boston marathon. It will bring together mothers and fathers, firefighters and athletes, young and old, gay and straight, conservatives and liberals, Yankees and Red Sox. And for twenty six miles and three hundred and eighty five yards, the differences will unite in a common cause. For a few hours time, Americans will respond to the worst humanity has to offer the same way they always have; by getting to work on doing some good. They will move with purpose and grace and dignity and faith because they understand the fight isn’t about showing the bad guys what we have. It’s about showing ourselves.

They will run to Boylston Street.

29 thoughts on “The meaning of fight”