Okay, so Frank over at aFrank Angle gave his readers a challenge.  Or in WordPress parlance (?) a ‘prompt’. He supplied an image, which I have included below and he asked his readers to create a fictional piece out of it. In 150 words or less.

Truthfully, I haven’t done a ‘prompt’ in ages. But hey, if our President can settle the country’s business in 150 characters or less, I think I can handle a fiction challenge.

I realize this entry will not be considered by the Academy due to the late nature of its submission. Ironic that I’m calling it a ‘prompt’, huh? 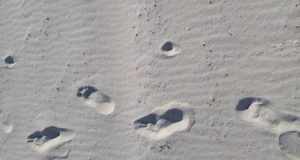 Footprints in the Sand – by Cayman Thorn

Taylor’s feet scalloped the minute shards of ocean glass into small indentations whose evidence was being stolen with each musical sway of the tides. His roam transformed inside the short walk- from confusion to recognition, and finally to a seething rage.

He dropped to his knees at the sight of the oxidized wreckage whose spires fought the darkness but whose symbolism had long since been stolen away in the name of a manifest power whose intention had never been to serve better angels.

“Trump did it . . he finally, really did it. You maniac! You blew it up! God damn you!” He screamed, as if his lungs could reach the wicked depths and all those long lost souls.

Nova gripped the reins of their horse and stared silently into the face of a murdered ideal, whose body was being interred by the fates.

They had reached the end of the world.

(Muchisimas gracias to Frank for allowing me to stay after school and finish this assignment. The link to his challenge is below just in case you didn’t click on my hyper-link up top.)